The US Medical Soccer Team embarked on their first ever International Friendly weekend October 24-26, 2014 in Mexico City, Mexico. As guests of the newly formed Mexican Medical Soccer Team, team USA met in Mexico City to participate in two soccer matches and connect with our North American colleagues. From the moment we walked out of airport customs, our guests demonstrated the most gracious hospitality any of us have ever experienced. Many of us got a first-hand tour of the city as we were given rides to the hotel by the Mexican team members. As it turned out, we had a roster of 14 for the back-to-back matches in the altitude of Mexico City (7350 feet), which of course made us all the more determined.

On Saturday, October 25th, USMST met for breakfast and developed a workable strategy for the two games with the players available. Everyone agreed that with only three subs (including Milo, who valiantly took to the field as well as playing incredibly well in goal) in altitude playing against a well-organized Mexican squad that practices weekly, we had our work cut out for us. Positions were less critical and flexibility based on who was fresh and who was gassed would turn out to be our calling card for the weekend matches. We played a 4-4-2 throughout the weekend, with a diamond configuration (stopper/sweeper) in back. Paulo and Milo handled the goalkeeping duties, with Gautam, Rolando Celis, Brett and Amir Saz in back. Mike Daines and Shawn Taheri played a combination of either outside backs and outside midfield, based on team need. Garrett Hyman, Jerry Sterkowicz, Farnoosh Tinoosh, and Mauricio comprised the midfield, with Sammy and Afshin up front. This line up turned out to work well.

Game 1 was incredible. Our Mexican hosts pulled out all the stops and had an emotional ceremony prior to the game. Enrique Martinez, the team captain, initially met Ferran Morrell 15 years ago, and the first match was a culmination of his dream and hard work over the ensuing years to pull a team together. After the national anthems and flag exchange, the game started with us making some great runs on offense. Unfortunately, Mexico scored two quick goals within a 5 minute span on counter attacks. We started the game quite unsure of how we would handle the altitude and playing without a practice together. The first half of the first game reflected this. Down 3-0 at halftime, we regrouped. In the second half, Mexico scored a goal in the first couple minutes after a failed clearance from the back, but for the remaining 38 minutes, the game was even. A handball gave them a penalty kick and a trip in the box gave us a penalty kick (which Afshin converted with an unstoppable shot to the upper right corner), but overall, the second half proved to give us quite a bit of confidence. We made crisper passes, maintained control of the ball, distributed to the outside and moved the ball down the sides, and maintained our defensive shape despite steady pressure from a very offensive-minded Mexican squad. This would bode well for the next day. In the end, however, it’s hard to take away tons of positives from a 5-1 loss, but my sense is that we learned a ton and it was good to bounce back with a solid second half. 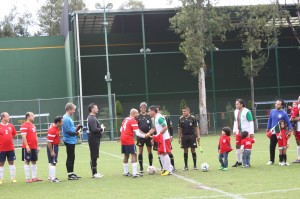 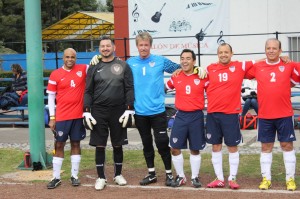 fter the game, we traveled to Xochimilco (pronounced “socheemeelko”), a borough of Mexico City with a series of ancient canals that house gondola-like boats carrying local partiers and curious tourists. The boats are always lively and well-decorated, and along with our Mexican hosts, we cruised the canals enjoying friendly company with our new friends, great Mariachi music, amazing food from mobile kitchens on small canoes, and local beverages. After an exhausting soccer game, our relaxing and fun trip to Xochimilco was tremendous. That night, the Mexican team graciously hosted us at a team dinner in the hotel, which gave us an opportunity to catch up and interact with the Mexicans off the pitch. 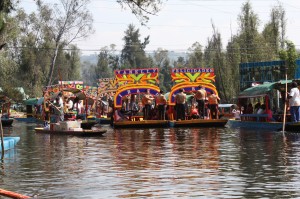 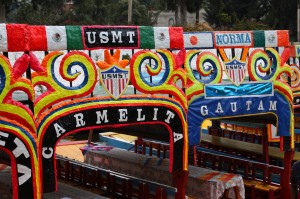 The next morning, Game 2 of the series saw us come out with more energy and a more defensive posture initially. We found significant running room down the sides, and were able to take advantage of a younger Mexican line-up that was even more offensive-minded than the day before. Towards the end of the first half, Rolando won the ball in the back, distributed to the midfield where Farnoosh maneuvered brilliantly to put the ball on the feet of a running Garrett down the right sideline. Garrett advanced about 30 yards with the ball before crossing into the center where a streaking Mauricio beat his defender and crushed a goal home past their helpless keeper. It was one of the most amazing USMST goals I’ve seen in that we took possession in the back and worked the ball all the way forward, finishing in incredible fashion. Unfortunately, we had another giveaway on our side of the field with a rapid counterattack a few minutes later, resulting in a goal for Mexico. The score at halftime was 1-1, and this score would hold by game’s end. We played very well in the second half, completely neutralizing Mexico’s attack on defense (Amir and Brett were simply tremendous — nothing was getting past them) and Paulo and Milo both contributing huge saves. Special mention also goes to Rolando, who was a force in the back and made some great runs with the ball at his feet. In the midfield, Jerry, Garrett and Farnoosh held very strong in the middle of the field, with Mauricio keeping Mexico honest with runs down the line and Shawn and Mike combining to make some nice passes. Up front, Sammy and Afshin were relentless. While they did not score in the second game, their constant pressure with the ball created tons of chances and changed the complexion of the game, especially in the first half. This was a huge boost to our defense, and gave us confidence early. At the end of the second game, a small ceremony acknowledged those that had put this tremendous weekend together and set the stage for many more USA-Mexico friendlies in the future. 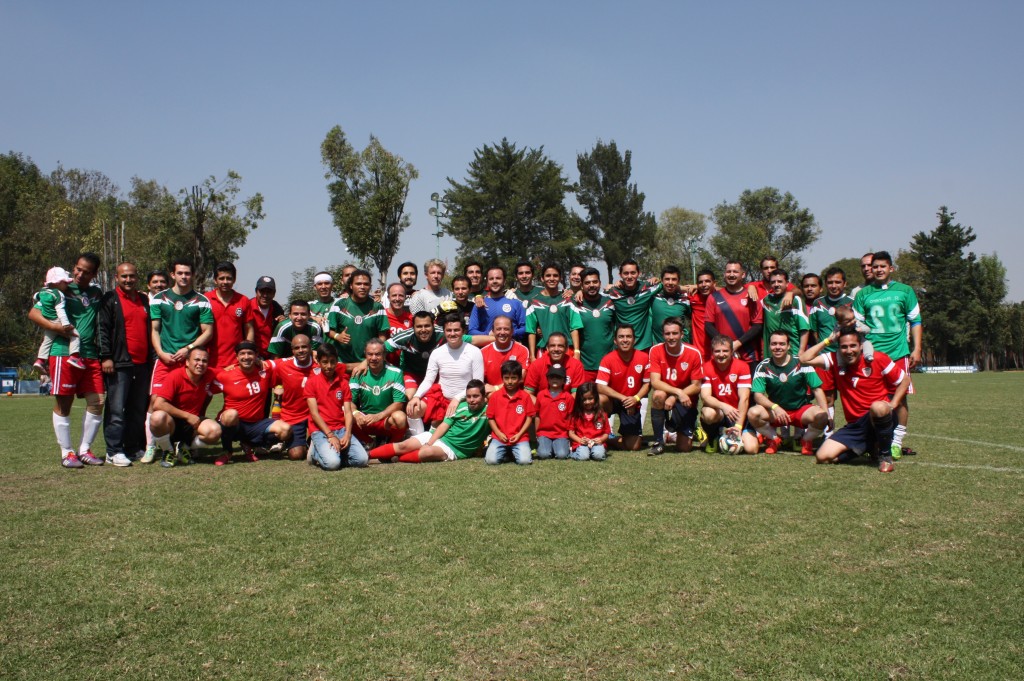 After the game, many USMST members traveled with our Mexican colleagues to a local park near Monte Halac, a homeless shelter for children coming from abusive backgrounds. While this was not our usual outreach event, it was incredibly powerful and emotional. We brought the kids pizza and cake, and spent the afternoon playing games and spending time with them. It was really tremendous, and everyone involved left the park with a sense of hope but also some sadness at what these wonderful children have gone through in their short lives. As soccer playing physicians living in the United States, it became abundantly clear that we are incredibly lucky. Hopefully, this was a day that the children would not forget, as I’m certain all of us from USMST will remember this experience for years to come. 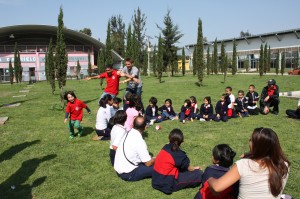 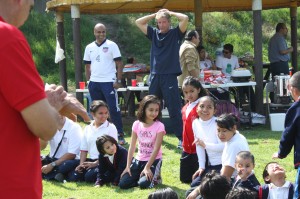 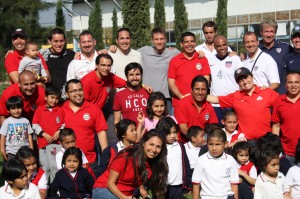 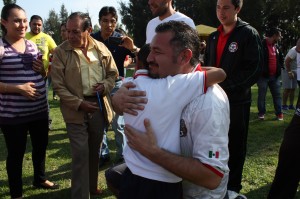 With that, we ended our trip and thanked our Mexican friends for their amazing hospitality. Words cannot describe how generous the newly formed Mexican team was as our host, and it may be next to impossible to repay them. We will have the honor of hosting them in Long Beach next year for the 2015 WMFC, and I suspect they’ll have a great showing on the pitch. USMST’s weekend in Mexico City was fantastic in that we played the game we love in one of the world’s most historic cities, made new friends whose passion for soccer is only exceeded by their commitment to our profession, and spent time getting to experience the country and perhaps in the process, giving back to our incredible hosts. In the end, Enrique mentioned trying this again next year, which I think would be tremendous. It will be impossible to replicate the feeling we had as a team throughout the weekend, but if our experience this year is any indication, many more of us will have an opportunity to take part in an event which left most of us speechless. 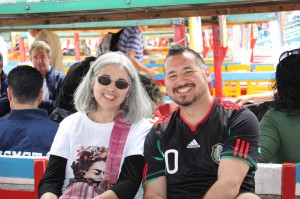 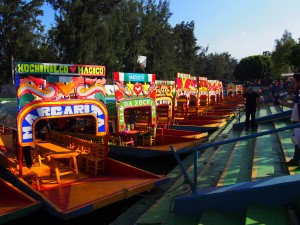 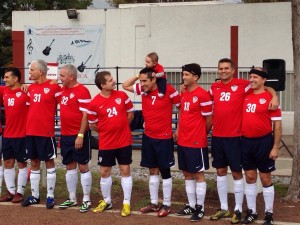 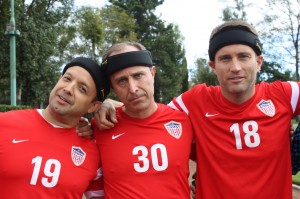 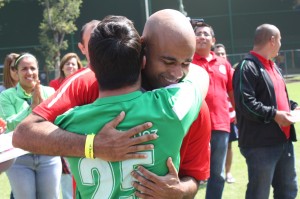 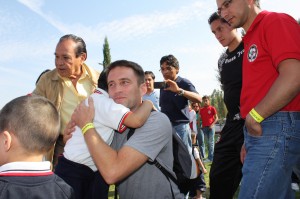