The US Medical Soccer Team had the incredible opportunity to play soccer in Brazil this summer during the 2015 World Medical Football Championships in Natal, Brazil. While the FIFA World Cup wrapped up in southern Brazil, medical soccer teams comprised of physicians from around the world converged on Natal to compete in “The Physicians’ World Cup”. The tournament week was spirited and competitive, but highly rooted in friendship and fair play.

For team USA, the week was up and down, but as the team looks back on the week in total, it is clear that USMST took a huge stride forward. The week started out with a fantastic victory over South Korea. The match took place on the same practice pitch used by the US National Team prior to their historic victory over Ghana in Natal a few weeks prior. USMST played a complete game with two goals in the first half and two goals in the second half and a solid defensive effort despite giving up an early goal. Terrific goals by Pasha Hakimzadeh and Puya Hosseini however were too much for our Korean friends to overcome. 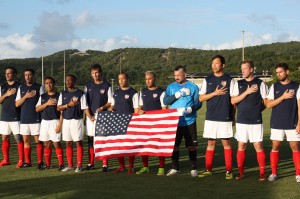 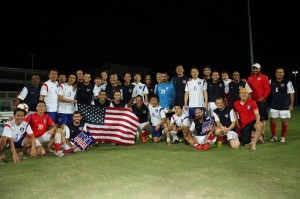 The second game in the group stage came against defending champion Germany. The game was evenly matched for over 70 minutes, with both teams garnering good play on both the offensive and defensive sides. The momentum was in Germany’s favor for much of the second half, and late in the game, they scored on a cross and header, eventually holding on for a 1-0 victory. While USMST took some consolation in playing tough with the defending champions until the end, the loss was tough to swallow given the opportunities USMST had to secure at least a draw and perhaps, with some luck, a victory. In any case, there was little time to dwell on the loss as Czech Republic awaited.

The team from Czech Republic, in their first year in the tournament last year, made it all the way to the finals, losing to Germany on penalty kicks in the Championship game. This year, they would also make it to the Championship, coming up short against host Brazil. USMST played them strong in the first half of the final Group stage game. In the second half, USMST made some critical errors and like any fantastic team, the Czechs made them pay, with two quick goals to go up 3-0, eventually securing a 4-1 victory against the Americans. Jeremy McClure scored on a nice goal late in the second half, but this was the only opportunity USMST was able to capitalize on. It was a fun game against a worthy opponent, but confirmed that team USA still had some work ahead of them to compete against the class of the medical soccer community. 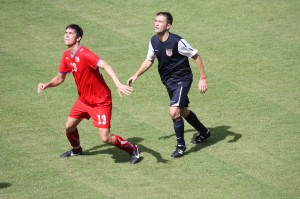 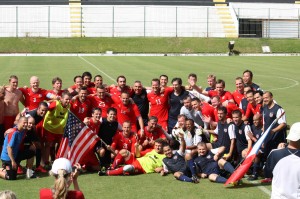 The consolation bracket was mostly disappointing, with a loss on penalty kicks to Russia (highlights included two great goals by Brian Blair and a fantastic late header goal on a set piece by Roy Thomson from Teach Caton in the final minute to send the game to PKs), and a loss in the final game to perpetual nemesis Lithuania (no highlights to report, other than it was the final game on a “challenging” pitch, played in a monsoon). The highlight game of the week, however, occurred in our game versus Austria. The first half started out shaky, with Austria scoring two relatively easy goals early on. USMST bounced back with a goal of their own by Puya Hosseini, only to give up a third goal shortly thereafter. Down 3-1, things looked quite bleak for USMST. The tournament was winding down, the team was playing in the consolation bracket, injuries were mounting, and it would have been easy to just pack things up. The team hadn’t truly played well since the first half of the Czech Republic game in the Group stages, and now, another loss seemed imminent. But like he always does when it comes to off the field logistics, Mauricio Pleitez (aka “El Santo”) came through with arguably the biggest goal of the tournament for USMST. His low, corner shot from the top of the 18 yard box with less than a minute remaining in the first half gave USMST a huge boost and confidence heading into the second half. The team played strong defense, and pressured well on offense, eventually tying the game on a set piece goal following a brilliant kick by Felipe Lobelo to the foot of Sammy Becdach, who crushed home a goal. With clear momentum on their side, it was not a matter of if, but when USMST would finally take the lead. With only a few minutes left in the game, a long, high pass over the head of the forwards deep in the Austrian end seemed destined for the hands of the keeper or possibly even a goal kick. The indomitable Sammy Becdach, however, had other thoughts, as he pressured the last defender out of nowhere, stole the ball off his foot, and then put home a perfect shot into the low far corner from the right side. Game. Over. And an inspiring comeback victory towards the end of an amazing week. 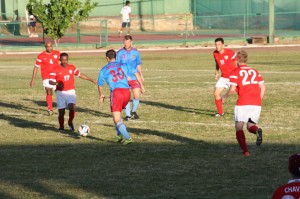 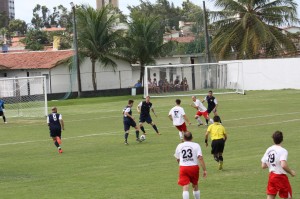 Overall, the week in Natal, Brazil was phenomenal. USMST learned to deal with adversity on the pitch, whether it was a challenging pitch, hot, humid weather, or the usual array of injuries. At the same time, there were many highs and lows, and through it all, USMST grew closer and played better collectively than at any point in the short history of the team. While the results were not what they hoped for, everyone left Natal excited for what awaits the team moving forward. Playing international soccer in storied Brazil (during the FIFA World Cup no less!) was an incredible adventure that will live in our hearts the rest of our lives. Building on this experience will be critical as USMST looks to fulfill a great opportunity as hosts in 2015! 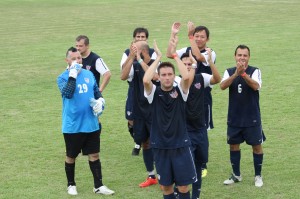 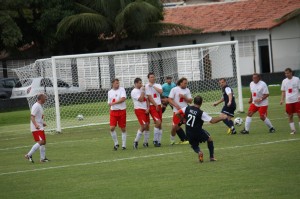 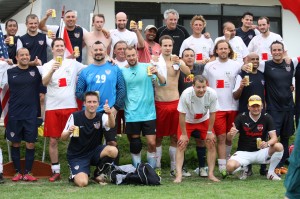 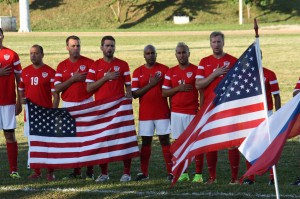 Check out all the goals from WMFC 2014 on this video:

For a bird’s eye view of the games from the sidelines, take a look (many thanks to Merin Yoshida for her awesome camerawork and to Mauricio Pleitez for the fun editing!):