The US Medical Soccer Team was privileged to host the 2015 World Medical Football Championships and Global Congress on Medicine and Health in Sport in Long Beach, California from June 27 to July 4, 2015. Over 500 physicians from 18 countries participated in the weeklong soccer tournament and medical conference, making this year’s Championships the largest to-date.
Over two years of planning culminated in a terrific week of soccer, medical education, community service and most importantly, friendship. The US Medical Soccer Team put their best foot forward in representing our nation and the result, while not perfect, was an incredible display of innovation, practicality, and fun.

This team video captures the spirit of the team and this amazing event:

The week started with the Opening Ceremony at the Long Beach Performing Arts Center. The outdoor venue provided the perfect backdrop for catching up with old friends and making new ones. Welcome addresses were given by Congressman Alan Lowenthal of California’s 47th Congressional District along with Adrian Hutber from the American College of Sports Medicine and President of Exercise Is Medicine. The evening officially kicked off with the usual array of team video presentations. The tournament draw took place indoors in the beautiful Terrace Theater, where Paulo Carvalho and Kirt “Teach” Caton from USMST dazzled the crowd with their humor and wit as they emceed the festivities while the musical backdrop was provided by DJ extraordinaire Kris Tropicana. 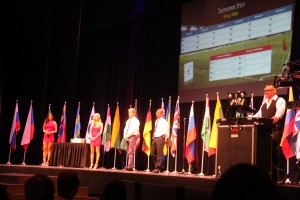 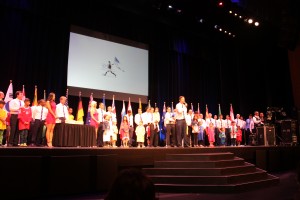 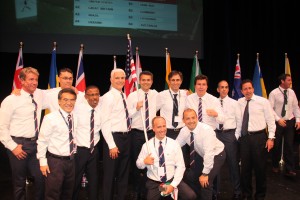 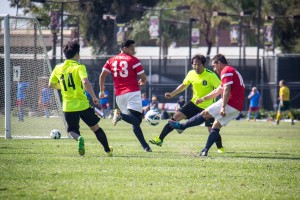 The soccer tournament, fondly known as “The Physicians World Cup” started on Sunday, June 28th at the George Allen Field at Long Beach State University. The venue was perfect for the large soccer tournament, allowing all teams to play in the same location all week, which provided a perfect opportunity to foster friendship and develop close ties off the pitch. This year, the second ever Masters tournament joined the regular Championships, with eight teams comprised of players over 45 years of age. The competition on the pitch for both tournaments was fierce, with a week of incredible play. In the end, Czech Republic took home the Morell Cup as champions of the regular tournament and Ukraine took home the Vogel Cup as champions of the Masters tournament. 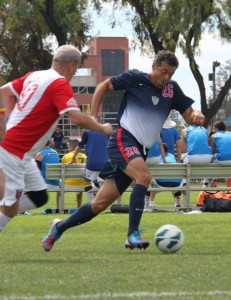 This year’s tournament highlighted the return of the most unique aspect of the WMFC.  The post-game questions were included in the rules in the early years of the tournament to ensure fair play in a soccer tournament designed for medical professionals.  Per the official rules, each team is allowed to challenge two players of their choosing from the opposing team at the conclusion of the game to ensure they are truly physicians.  These players are then required to take and pass a simple medical examination.  Issues related to language and country-specific training were obvious challenges with 18 teams from around the world in attendance, but USMST embraced the opportunity to honor this unique tradition.  This year, Dr Brett Lorber from USMST developed an exam that was specialty-based and could be given regardless of language, specialty, or level of training.   With descriptive cards encompassing basic medical images, Dr Lorber was able to administer the exam to anyone, regardless of language, with the use of teammates (blinded to the questions) as translators when necessary.  The experience was fun for (just about) everyone and ensured an equal level of play in this amazing event! 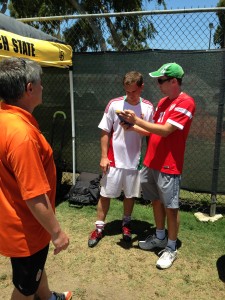 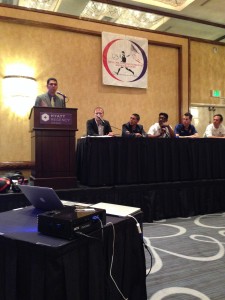 The 2015 Global Congress on Medicine and Health in Sport brought our physician cohort together each evening for a few hours of education covering such topics as sports medicine, concussion and head injury, exercise physiology and the global obesity epidemic. Each session was moderated by luminaries including Dr Bert Mandelbaum (US Mens National Team physician and LA Galaxy Team physician), Dr Vernon Williams (Concussion specialist for the LA Lakers and LA Dodgers), Dr Christopher Cooper (Exercise Physiology professor from UCLA), and Dr Nicole Mihalopolous (Obesity expert from University of Utah). Numerous outstanding presentations were given by the physician soccer players from around the world, and the highly selected program enriched the week and laid a great foundation for future Congresses. 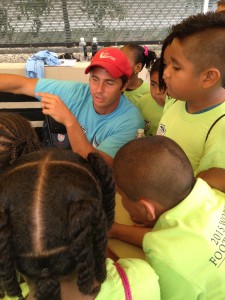 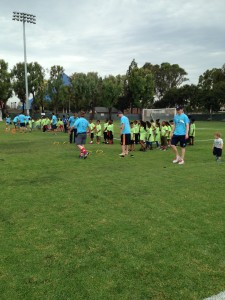 While the soccer and medical education brought us all together, community service brought meaning to the World Medical Football Championships. On Wednesday, July 1, USMST in partnership with the Long Beach Boys and Girls Club hosted the first ever “Healthy, Fit and Smart” Kids Day at Long Beach State University. Over 200 local youth participated in a fun morning devoted to promoting the importance of nutrition, fitness and education. The program utilized USMST’s outreach toolkit “Healthy, Fit and Smart” to lay a foundation for the children at a time when lifetime habits are often formed. The kids, along with our team and international colleagues, had a blast!
A mid-week tour of Hollywood and Los Angeles gave everyone a great opportunity to socialize off the pitch. Sunseekers Tours of Long Beach provided the transportation and tour guides, and everyone had an amazing time checking out the more iconic sites of Southern California.
The week concluded with the Closing Ceremony at the Long Beach Convention Center. Music by DJ Kris Tropicana provided a great backdrop for the awards ceremony and dinner. The Grand Ballroom was an amazing venue for this last chance to get together, exchange jerseys, and simply enjoy the experience before next year’s tournament in Barcelona. People danced late into the night, once again confirming that the Americans can hold their own on the international stage of soccer, medicine and friendship. We can’t wait until next year! 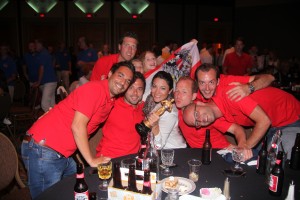 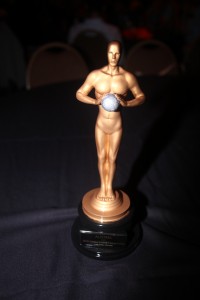 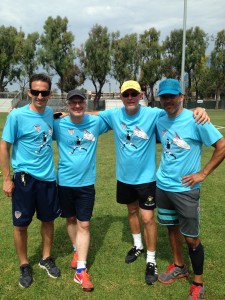 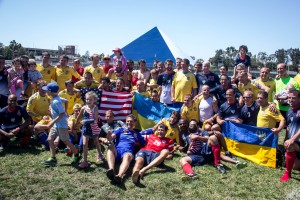