In April, 2010, USMST’s inaugural practice weekend took place in Los Angeles at Harbor College.  The weekend was filled with excitement, but soon followed the sobering reality that the team was not close to playing real football on an international stage.  Those days at Harbor College soon became a distant memory as the fourth iteration of USMST gathered in El Segundo, California on January 19th and 20th for their first team practice and trial weekend in anticipation of the 2013 World Medical Football Championships in Budapest, Hungary. 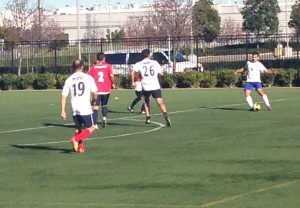 After an opening motivational statement from Coach Stephen Merriwether, the weekend started with some critical drills involving footwork, passing, and one-on-one situations.  This evolved into game simulations on a short field focused on peripheral passing and ball movement.  After a lunch break, the team returned for a full field scrimmage which helped solidify many of the concepts developed in the morning.  With more than enough players to form two full teams, everyone had an opportunity to get significant playing time.  It was very clear from this initial scrimmage that our team was going to be more formidable on offense and would still maintain a strong defensive core.  The key to the scrimmage came when each team made significant adjustments on both sides of the ball at the halfway point, and in the end, the game ended in a tie.

It was fairly clear by the end of the first day that USMST was starting to form an identity, picking up where they left off in 2012 and hoping to add new pieces to help in the the evolution of the team.

After a fantastic evening of Korean Bar-B-Q, comradarie, and reminiscing, USMST took to the field on day two starting with another scrimmage.  This game was more defensively oriented, with multiple stops in play by Coach to focus on important passing concepts and critical positioning situations during transitions in play.  The afternoon was focused on dribbling drills and short field offensive and defensive situations.  These condensed field drills and the situational learning will hopefully lead to improvement in basic soccer techniques critical to improving on the pitch in Hungary. 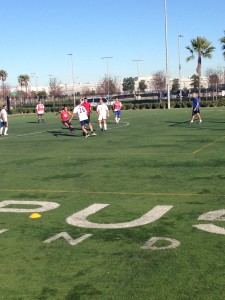 At the end of the first weekend practice, it became clear that USMST was moving forward quickly and has the potential to improve significantly on its last place finish in Sweden.  The key will be to continue to improve on the fundamental concepts related to optimal team play as individuals and in concert with each other.  New pieces were added and old pieces were regenerated.  The next five months will now be the true test of how committed the team has become to upping their game at the World Championships.  Game on! 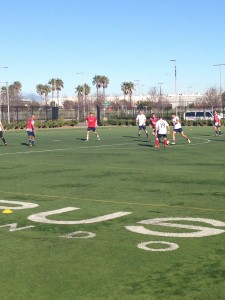